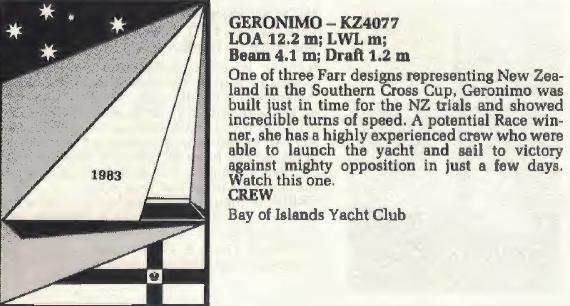 1984 NZ inter-club relay regatta.
Sold to US owner, painted in red and re named:

Total Eclipse, US 33990
From Internet, One Ton Class Facebook 2014 anchored at Newport:

2000 She was re-fitted for cruising getting a cherry and white interior and a new fin keel.

2009 MacMan Race: ?e/?? and first in her clas
In shipyar yo get dawl-gripp light destroyer grey, her bottom epoxied, and the keel reconfigured to wing type to reduce draft. Her wing keel is lead with stainless steel keel bolts.
Aurora Borealis,

2017 May, from One Ton Class Facebook: "Geronimo is back. Farr 40' #136. Modified for cruising. For sale. Currently in Lake Huron. This is the boat that Ken Read sailed to a 3rd place in 1985 SORC. Needs some work. Help bring her back to her former glory. Pacific Sundance - your sister is back to bug you!"

July, For Sale, In 1985, renamed Total Eclipse, she placed 3rd overall in SORC skippered by none other than Ken Read, the year he won yachtsman of the year.
She was re-fitted for cruising in year 2000 getting a cherry and white interior and a new fin keel. She competed in the Mackinac Race in 1999&2000 and was first in her class in the 2009 MacMan.
PHRF 69; Aurora Borealis was built in 1984 by Cookson Boats LTD in Auckland, New Zealand. The company is one of the most famous builders in New Zealand and has built American Cup boats along with numerous Farr designs. The hull and deck are foam-cored fiberglass and Kevlar. She was awl-gripped light destroyer grey, her bottom epoxied, and the keel reconfigured to wing type to reduce draft in 2009. Her wing keel is lead with stainless steel keel bolts. Th The last 10 years have been exclusively freshwater. Can$  30,000 (US$ 23,979), Located In: Sault Ste. Marie, ON

2021 For Sale Farr 40 Cookson Sloop / Farr Design #136 1984 Year: 1984, Price: Can$ 75,000 (US$71,505), Aurora Borealis is a 40' Bruce Farr design built by legendary Cookson Marine of Auckland, New Zealand. She is in ship shape condition and ready for a new season. In 2000, she was refurbished with a cherry interior with white offsets along with new electronics, sails, and electric windlass. The keel was reconfigured to a wing type to reduce draft in 2009. She was first in her class in MACMAN 2009. Aurora Borealis has been in fresh water since 2000.