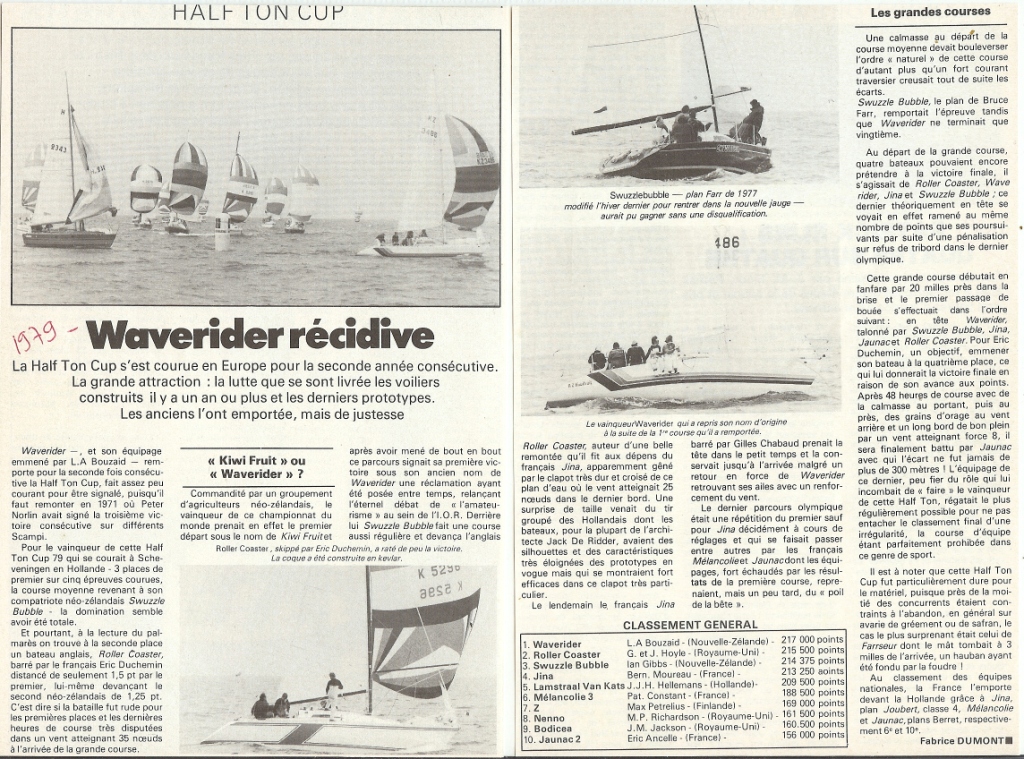 Tony Bouzaid and his crew, for the second year running, sailed their Waverider to victory in the Half Ton Cup. The Kiwis, however, achieved this just reward only at the end of a difficult series, where the struggle for first place continued to the very last minute.
Fifteen miles from the finish of the last race, the four leading crews were still neck and neck, and in the final classification they were only four points apart. Before the start, Waverider, holder of the 1978 title, was automatically the favourite. She had been modified to suit the IOR rule for 1979, with an altered rudder and more ballast. Besides the three year old boat, New Zealand were looking for success, from Swuzzlebubble. Waverider was skippered by Tony Bouzaid, a master sailmaker with Hoods in Auckland. Swuzzlebubble, belonging to Ian Gibbs, was equally strongly crewed by Murray Ross and Andy Ball. These two Flying Dutchman specialists, already famous for their sailing expertise, made Swuzzlebubble the most threatening boat at the start of the Championship. But from the beginning, Waverider was successful- taking the first Olympic course race of 30 miles in a light wind. Then on an identical course but in even lighter airs, it was the Frenchman Moureau who brought his Jina through to victory. Waverider was still there in second place. In the third race, 180 miles long, a massive blunder by Waverider's crew relegated her to 20th position. Jina, with a penalty of 10 per cent of her time, for having crossed the line at the start in the last minute found herself dropped to eighth. Swuzzlebubble carried off this race majestically in front of Dutchman Lamstraal Van Kats. these two boats went to the top of the overall classification and it looked like the turning point of the whole championship. However the third Olympic type course was to put Bouzaid and his crew back on top. in the usual Dutch drizzle with very strong North Sea currants, and thanks to a good force 5 breeze, Waverider went through to a second win in ideal conditions. Swuzzlebubble, third at this time had some bad luck. She missed on mark because of the current, and in turning it refused to give way on port-and-starboard.
The New Zealanders, penalised for their mistake, lost about 10 places by this difficult manoeuvre. In the following winds they vainly tried to catch up with Waverider and the British team, among which Roller Coaster had a very good race to take second place. Jina held up by a tactical error, finished in the middle of the fleet.
Before the start of the long final race, five teams actually had a chance to take overall honours. The long course of 280 miles was made up of a rectangle described within the North Sea. Setting off from Scheveningen, the 35 boats were set a long beat towards the English coast, then travelling along the coast under spinnaker, turned a mark of the Essex coast to return downwind to the Dutch buoy Texel and finish off La Haye.
Waverider, Swuzzlebubble and Jina set off at electrifying speed. When the wind dropped during the night Jina caught up with her rivals while behind them Roller Coaster and Jaunac were engaged in another duel. At the Texel buoy it was impossible to forecast the final order. Roller Coaster lying fourth, seemed to have the overall series in her pocket. But then she was passed by the French Jaunac and losing that place meant that the overall victory would go to Waverider, winner of three of the five races of this 1979 Half Ton Cup. Tony Bouzaid and his crew fully deserved their title. But their victory was undoubtedly the result of both experience and technical superiority. On the question of boat design, the two New Zealand craft and the French boat Jina were all similarly built. Bruce Farr, Laurie Davidson and Michel Joubert all design hulls with flat after sections, very wide with U - shaped forward section. These hulls designed to go well down-wind, also worked well to windward thanks to very sophisticated rigs. Waverider used an aluminium mast by Yacht Spar with an oval section. Bouzaid reckons that this mast was probably the main reason for his success. He admitted that he spent a lot of time getting the rig right and he thought that both Swuzzlebubble and Jina lost out by not having a similar set up. Roller Coaster, on the other hand, was unusual in that she was mush more of a cruising style design by the Englishman Rob Humphreys. Very good to windward, this yacht was rather tender downwind. Once she had been selected as the British entry, she took Eric Duchemin and David Howlett into her crew- two very experienced Olympic Class sailors- Flying Dutchman for Duchemin, Finn and Star for Howlett.
In the team table, the French were first, ahead of the British and the Dutch teams. The outstanding characteristic of the 1979 Half Ton Cup was that the competing boats were so alike in design that we often had the impression that we were witnessing a battle of One-Designs. 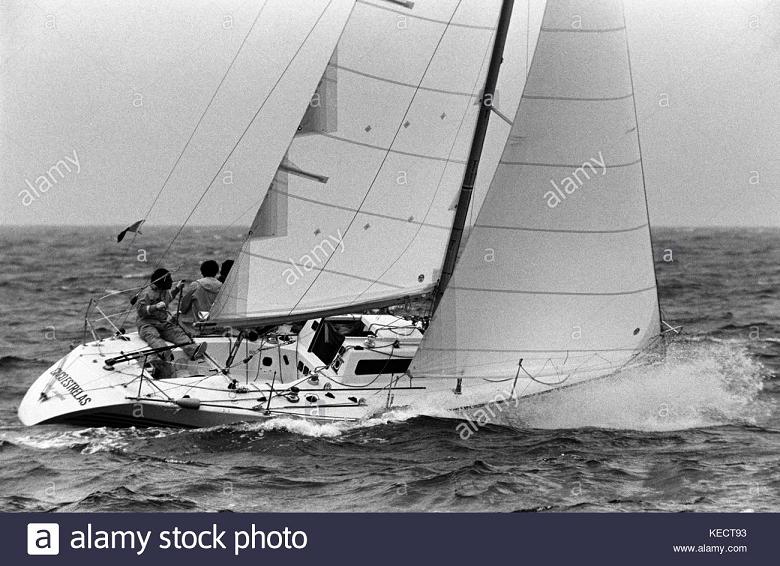 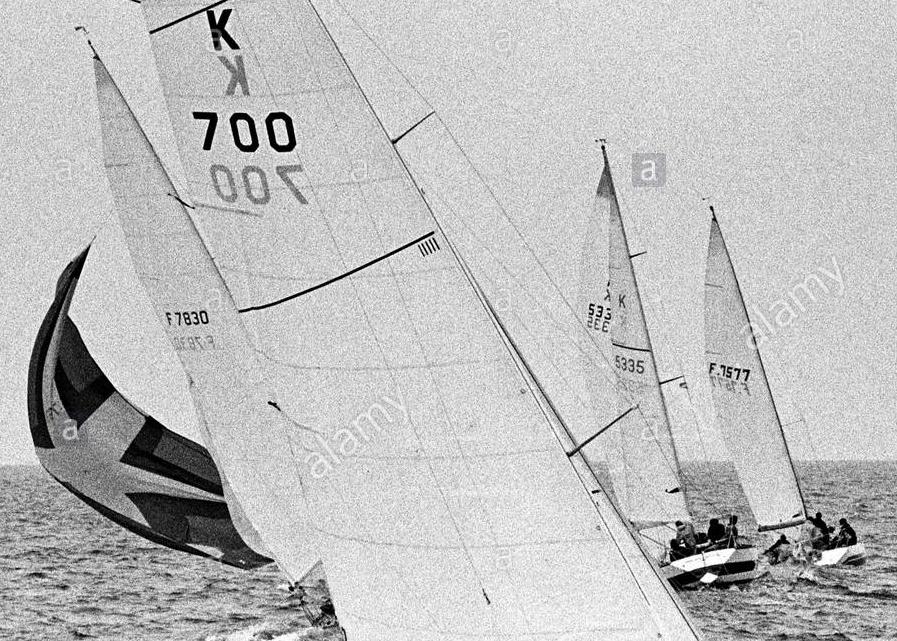 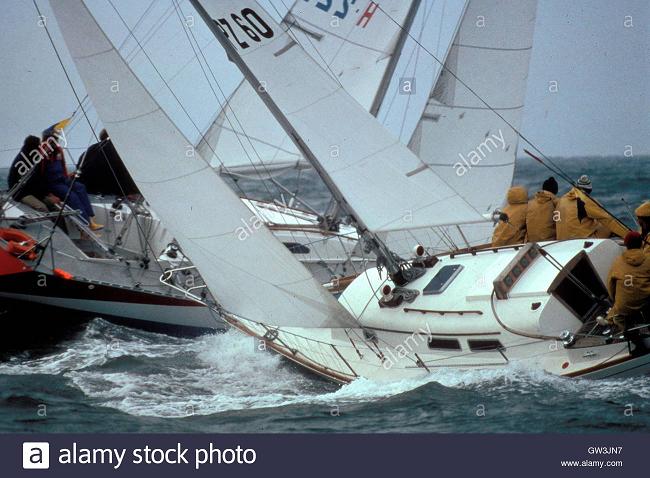 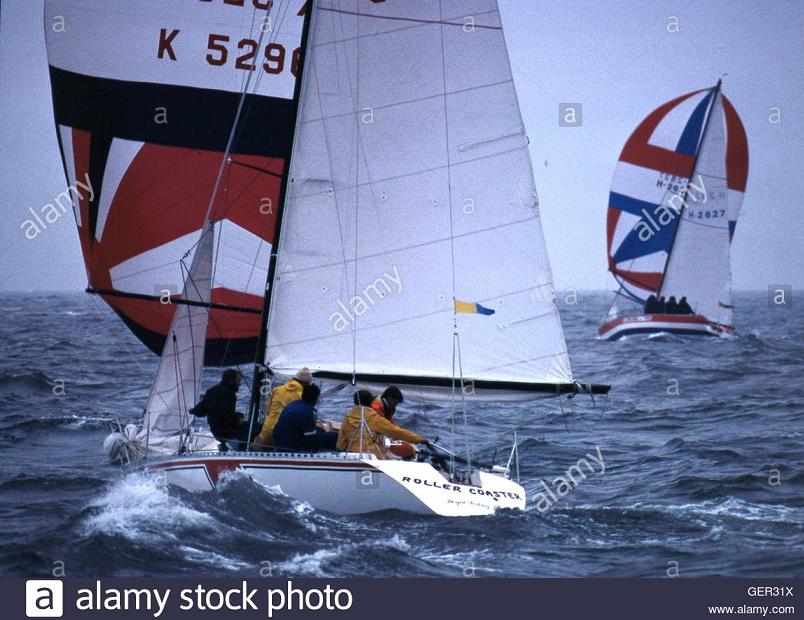 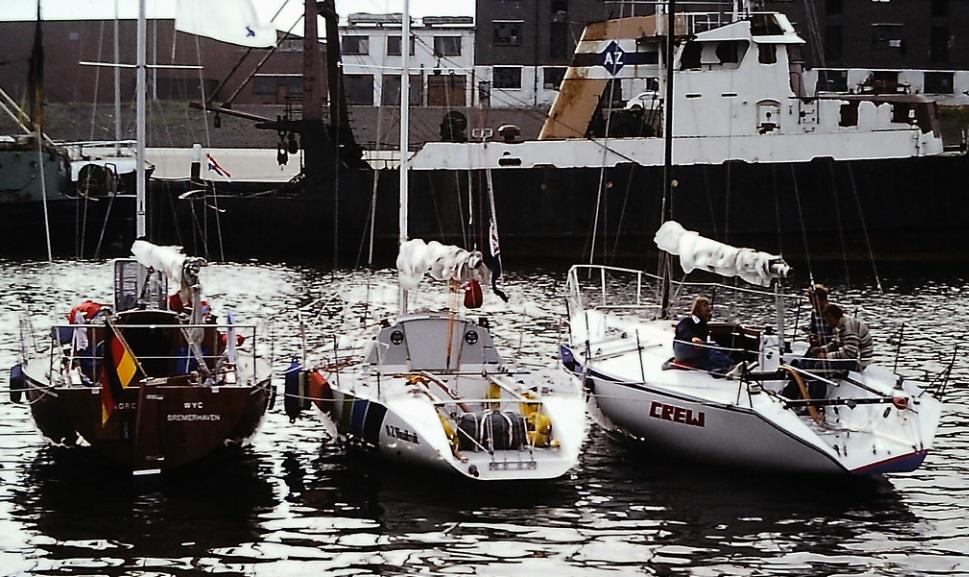 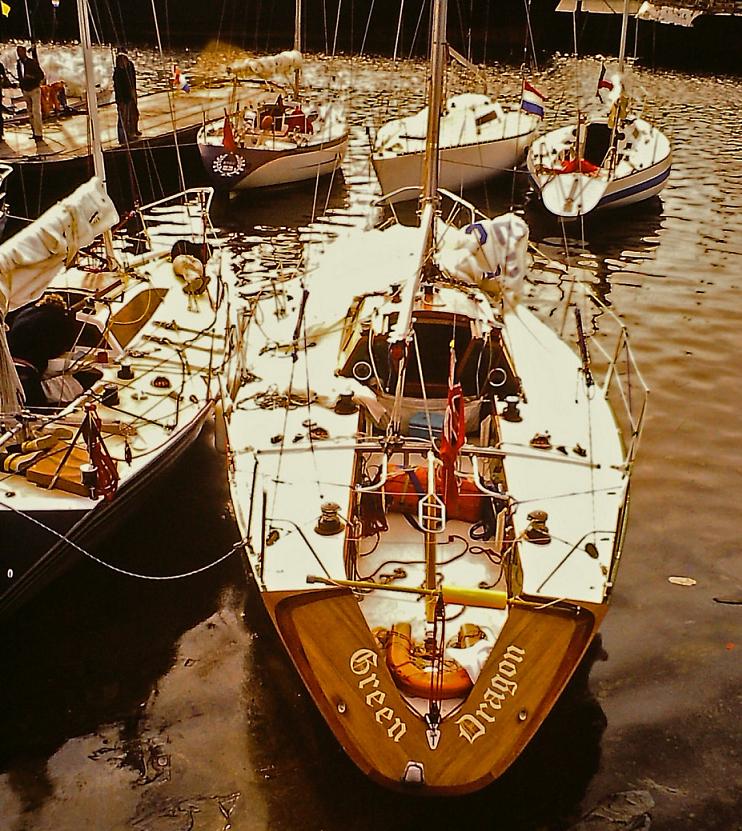